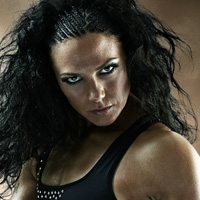 Stinger is the Gladiators secret weapon. This small but dangerous Gladiator is often underestimated by her opponents because of her size. Contenders often see her as less of a threat and relax, something they later live to regret when she has defeated them easily.

Originally known as Puma in the fifth series of the classic Swedish Gladiators series, she has returned with a new persona and renewed determination.