Contender and Gladiator are stood on platforms at opposite ends of the arena. Hang Tough is a game of aerial chess played 3.6m above the arena floor. In between them is the playing area consists of 60 rings which are 1.2m apart.

On the whistle both competitors commence towards each other by swinging and traversing the rings.

The Contenders objective is to reach the Gladiators platform while the Gladiator is trying to wrench them from the rings to the crash mats below.

Half of the rings (on the Gladiators side) are named the 'scoring zone' the Contenders must reach this area to be in with a chance of scoring any points.

Both the Contender and Gladiator must start the event at the same time and neither are allowed to return to their platform.

A Contender and Gladiator may not remain on the same ring for more than 10 seconds unless in direct confrontation with each other.

A Gladiator must not strike a Contender in order to take them off the rings, they should remove them as safely as possible and no attack to the head or headlocks are allowed. 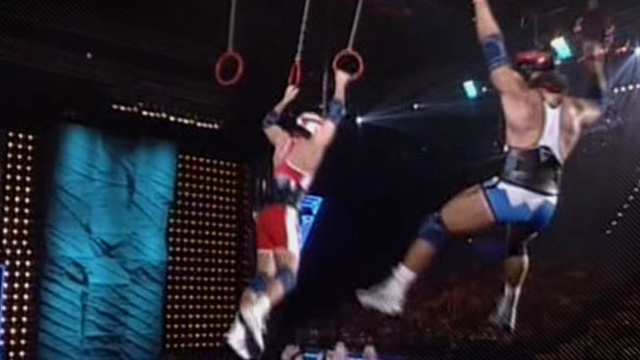