The Eliminator was the final event of every show. After a series of games against the Gladiators, the Contenders finally go head-to-head in the Eliminator which is a gruelling obstacle course spanning across the whole of the Arena floor.

Against the clock, the Contender who has the most points (from the prior events against the Gladiators) has a headstart. Each point above the score of the rival Contender is worth half a second head start.

Contenders have to vault over and scramble under three beams, bounce on a trampet and climb a 20-foot cargo net, climb a rope up to the overhead ladder for women, or the handbike for men (both 20 feet), cross a trapeze, climb another cargo net to an aerial platform, fly 90 feet down a zip line to the Arena floor and then cross two 16-foot see-saws to the piece of equipment which the whole show is won or lost - the strength-sapping Travelator. After a successful run, the Contenders then grab their rope and swing through the paper burst.

The Contender must start on their respective first or second whistle (dependant upon points).

If a Contender falls from the overhead ladder (women) / handbike (men) or trapeze they have to wait for 10 seconds before proceeding to the next element.

The first Contender to reach the aerial platform from the second cargo net must take the furthest zip line to the Arena floor.

Contenders must not use any part of the static sides of the Travelator to aid them reaching the top of the platform.

If, after a video review, a tie takes place, after a short rest period, the Contenders will re-run until a winner is declared. In each re-run the Contenders start simultaneously.

If, for any reason, both Contenders do not make it up the Travelator, a short rest period is given and they will both restart.

The Contenders must not impede their opponent in any way. Disqualification will lie solely in the referee's hands. 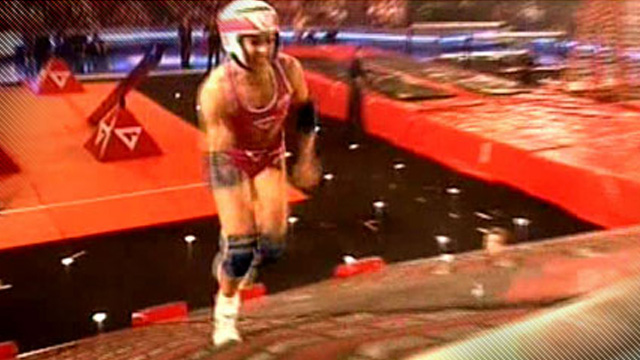